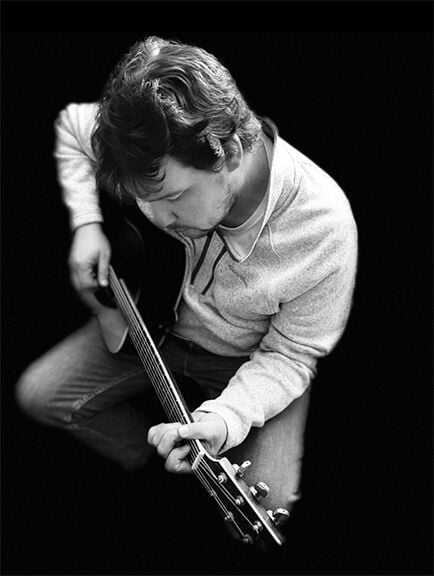 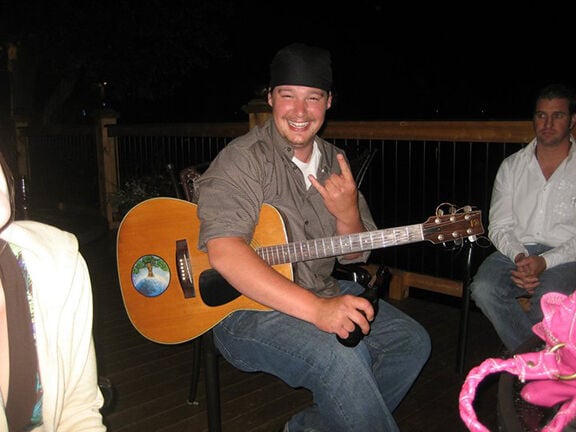 Word of mouth is a powerful way to get some publicity in a small town, especially in the days before social media was such a prominent way to get information out to the masses.

For Shane Goodwin, the word about this entertaining singer/songwriter spread around quickly here in the greater Newport/Derby area, and soon he could be found performing on stages throughout the county and beyond.

While Shane currently resides down in Central Virginia, the Newport native’s impact can still be felt, and when he returns to the area, those that have both been entertained by him and have played with him, tend to flock to wherever he may set up shop for a night of music that takes people back to a simpler time.

We caught up with Goodwin to talk a bit about how he got started, what he is currently up to, and a little more.

“My first taste of all things that rock, is a very clear memory,” said Goodwin. “I was like 4 years old, sitting on my oldest brothers bed with crochet hooks air drumming to Shout At The Devil, by Motley Crue. I knew from that point on, I was going to be Tommy Lee! Turns out I was a little more like Neil Young partying like Tommy Lee.”

With a fire lit under him thanks to the sounds of 80’s hair metal, Shane would go on to teach himself how to sing, play guitar, and could often be found sitting under the learning tree of another local musician, the late Craig Sears, who he would go on to perform with in bands such as Coventry Rhode.

He would later dabble in playing the harmonica, loved getting on a set of drums, and recently has purchased a bass guitar.

While he doesn’t have a favorite performance that stands out in his mind, he did talk about some of his experiences playing out.

“I can remember some really bad gigs, haha, but I’ll spare those stories,” said Goodwin. “Ultimately I miss the fourth of July shows. It was a lot of work to organize and dealing with the weather, but it was so much fun. By the time I left town, we were getting some great crowds, and the rec dept. had really gotten on board with us and our vision. So those are great memories.”

Shane also connected with the fans by placing second in a singer/songwriter contest and getting to perform live on the radio.

“A lady called into the station immediately after (I was done playing), super elated and curious who I was, so the DJ handed me the phone,” he said. “She said some very nice things. So that was cool.”

Shane says he doesn’t have a particular style he prefers, stating, “ I don’t really have a favorite style, mainly because I’m not a technical player and didn’t study theory, so I don’t feel righteous enough to claim a style has my favorite. I just love playing.”

Shane talked about what he has been up to recently, saying, “I’m not currently in any band. I honestly haven’t gigged in eight years, as I have just been focused on being a parent. This year I decided to turn that around and do some recording. It’s been very therapeutic, but I miss the live audience. Looking forward, I would like to start gigging again. I want to write some new stuff and try to get it out there. I have been putting my old stuff (and a couple new songs) on my Soundcloud page, for now. I am going to remix (them) soon, and get them on iTunes for people to purchase. So you can check them out now for free.”

As we do with all of our artists, we ask them if there is anybody they would like to thank for helping them out along the way, and Shane said, “I would like to just thank all of the people that have supported me and my music over the years! Looking back, I could and should have done a lot of things different. I never had a very good self image, which made it hard for me to sell myself beyond my comfort zone. In a way I always felt like I kind let people down, you know, for not ‘making it,’ but I’m pretty sure the path I was on would not have ended well with money or fame. So thank you all who still support me, and come to see me when I’m around!!”

If you are interested in checking out Shane’s music, you can find him on the following outlets: Shanejamzz/instagram, Shanegoodwinmusic/YouTube, Shanegoodwin/soundcloud. You can also follow him on Facebook at Shane Goodwin Music.

If you know of an artist that deserves to be featured as our Artist of the Week, please send their contact information to sports@newportvermontdailyexpress.com for consideration.